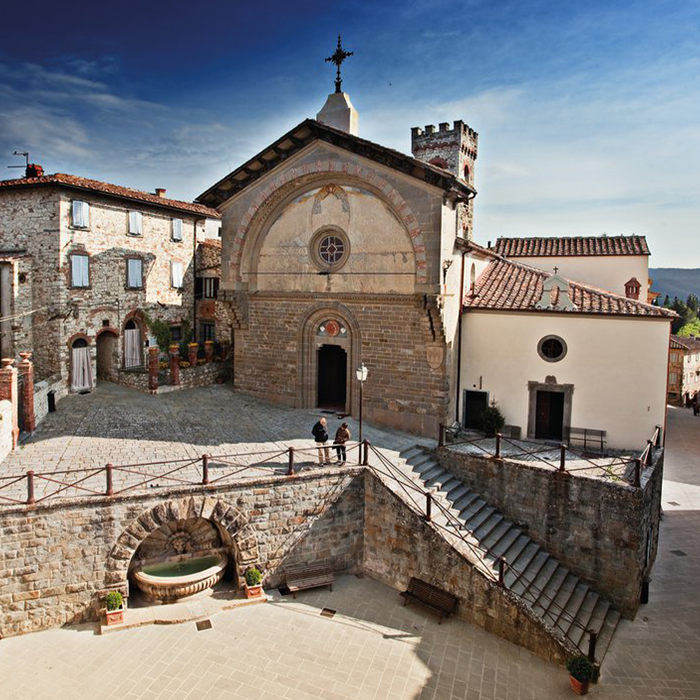 Tour of the town, suitable for anyone, to do on foot and slowly, in order to discover the most picturesque corners,
historical monuments, traditional shops and local products.

The ancient part of the town has preserved its medieval walled structure up until today, surrounded by a street that goes around it. The historical centre of town still has the ancient urban layout in an elongated elliptical shape, with the remains of the walls and towers that belonged to the fortified circuit, which has been partially incorporated into the houses.

Our itinerary will take you to the most beautiful and characteristic corners of our little village. You start at the Public Gardens in Piazza IV Novembre entering via the Porta Valdarnese, looking east. At the beginning of Via Roma, turn right immediately into Vicolo degli Archi that leads shortly into a fascinating little square above the second ring of the walls, popularly called “Conventino” (Little Convent); from there, turn left right away into Via Degli Orti and left again passing through the picturesque Arco Del Castello (the Castle Archway) and arriving at the highest part of the town where the most ancient area of it lies: the Castle that gives the name to the square. Turn again to the left into Piazza delle Scuole (Square of the Schools) and going under a small arch you will find yourself in the square in front of the Church of San Niccolò (Saint Nicholas), the patron saint of the town, who is celebrated on December 6th.

This is the parish church of the town in the highest position with respect to the main street opposite the palace of the Podestà. Already in 1260 its existence was documented in the Book of Montaperti; the oldest proof is in the lists of the tithes paid during the years 1276 – 1277 and 1302 – 1303.

It is mentioned in the land registry of 1427, in 1600 it was promoted to priory and in 1616 the baptismal font was installed there, and then in 1899 it became a parish church.

The church certainly was not spared destructions and transformations; the various renovations throughout the ages greatly altered its original aspect both externally and internally; the most significant regards the 18th-century façade that was completely rebuilt in 1926 from a project by Adolfo Coppedè; in the same project was the construction of a public fountain built into the sustaining wall of the square of the Church, supplied by a jet of water coming from a decoration in the shape of a lion’s mouth.

Today’s bell-tower is the result of a modern renovation carried out in the 1950s; Romanesque traces of the building are visible on the backside and at the base of the bell-tower. The last restoration of the church dates back to 1969, more recent was the reinforcement of the bell-tower in 1997.

The neo-Gothic façade is dominated at the top by a wide arch with a span-roof, supported by double trusses in the form of a lion’s torso. In the arch, fragments can be seen of a medieval fresco representing the Blessing Christ with a Nativity scene above it, which recent studies have attributed to one of the Coppedè brothers. The façade and the portal are in sandstone; the latter is surmounted by a lunette inside of which there are some coats-of-arms and majolica tiles representing the Madonna and Child in terracotta and, at the sides, two Angels in white enamelled terracotta. The inside has maintained its Latin cross layout with a wooden span-roof; of remarkable interest are the two fonts for Holy Water and the baptismal font in pietra serena from the end of the 16th century or the beginning of the 17th, as well as a niche that houses a 20th-century fresco of the Baptism of Jesus. Along the nave, there are two wooden confessionals from the 18th century and on the wall above on the left is the marble pulpit. In the left aisle there is a painting of the Madonna of the Rosary, Child and Saints, a work of art from the late 16th century, recently attributed to Alessandro Allori; from here one enters a small chapel furnished as the “Cave of Lourdes” with a painted wooden Madonna. In the right aisle there is a statue of the Blessing Christ. The ceiling frescoes in the choir represent four Stories of Saint Nicholas datable to the beginning of the 20th century and attributed to L. Arcangeli. Above the High Altar, decorated with a frame of pietra serena there is a polychromatic wooden Crucifix with moveable arms for use during the Holy Week, attributed to a 15th-century Florentine artist of the tradition of Donatello, which has been of special and quite remarkable popular veneration ever since ancient times and which has been carried in procession during times of catastrophes: plagues, wars, droughts, etc.

Going down the stairway of the church, you get to Piazza Francesco Ferrucci with its 14th-century palace of the “Podestà”, which is the Town Hall today.

A wide staircase leads down to the ground floor into a large covered loggia that has a copy of an original fresco on the wall at the end on the left; the original fresco is inside the palace, on the first floor, and represents the Madonna, Child, Saint John the Baptist and Saint Christopher; it is a 15th-century painting from the Florentine school of artists. The façade of the building, where there are arched windows on the first floor and a mechanical clock above them, is still decorated with several coats-of-arms in stone and glazed polychromatic terracotta belonging to the Podestà of the Chianti league, who had resided there and who had placed them there in remembrance of their terms of office. There are others on the inside walls of the arcade; among these there is one on the left in sandstone belonging to Francesco Ferrucci, who was Podestà of Radda in 1527, the hero of Gavinana, and a captain in the service of the Florentine Republic. The palace, built in the 15th century, was completely destroyed during the Aragonese invasion in 1478; it was later enlarged in 1700 when the second floor and the jails were added. These were used during the Second World War to imprison some opponents of the regime; it is only possible to visit them when exhibitions are set up there during the year.

Going back to the square, turn to your right and go down into the Sdrucciolo di Piazza (Steep Slope of the Square) and after just a few metres, on the left, go into the charming Medieval Communication Trench, recently renovated. You will then arrive at Via Roma, which you should take towards the left, leading you out of the old part of town via Porta Fiorentina. Begin here the itinerary that will lead you around the whole circle of the walls, going along the entire Via XX Settembre with beautiful views onto the valley that leads towards Siena, where various fortifications can be seen. Once you have arrived in Piazza IV Novembre, follow on along Viale Giacomo Matteotti with a fantastic view of the villages of Volpaia, Albola, as well as the new vineyards, the old farmhouses, and from where you can also catch some wonderful sunsets. At the beginning of the “viale”, you should take a quick look at the outside of the so-called “Grand Duke’s Ice House”, a peculiar structure built in 1897, used at the time for the transformation of snow into ice in order to preserve foodstuffs.

You can go back into the old part of the town via Porta Fiorentina and go left onto Via Trento e Trieste and Via Dietro Le Mura in the most ancient part of the village, so that you can get back onto Via Roma and go through Porta Valdarnese in Piazza IV Novembre, where it will be possible to relax peacefully in the shade of the Public Gardens. 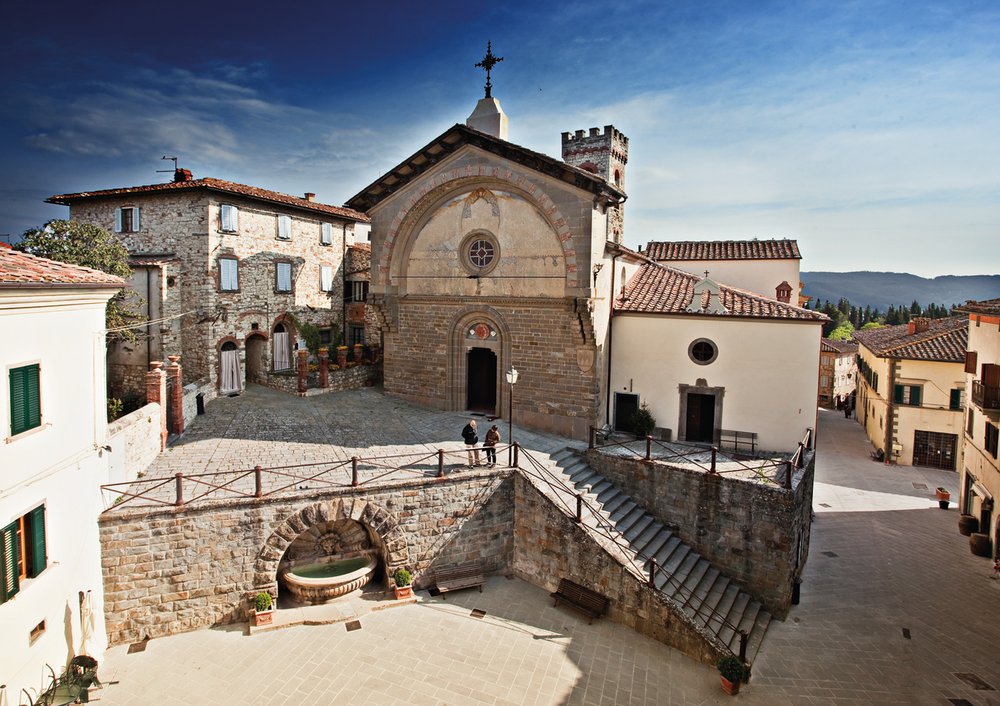 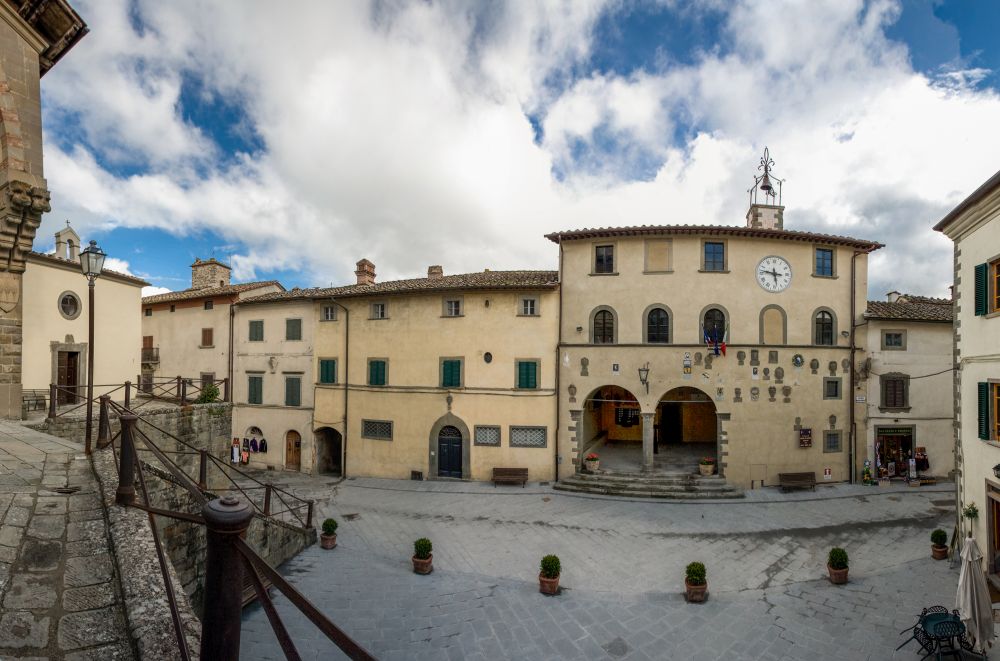